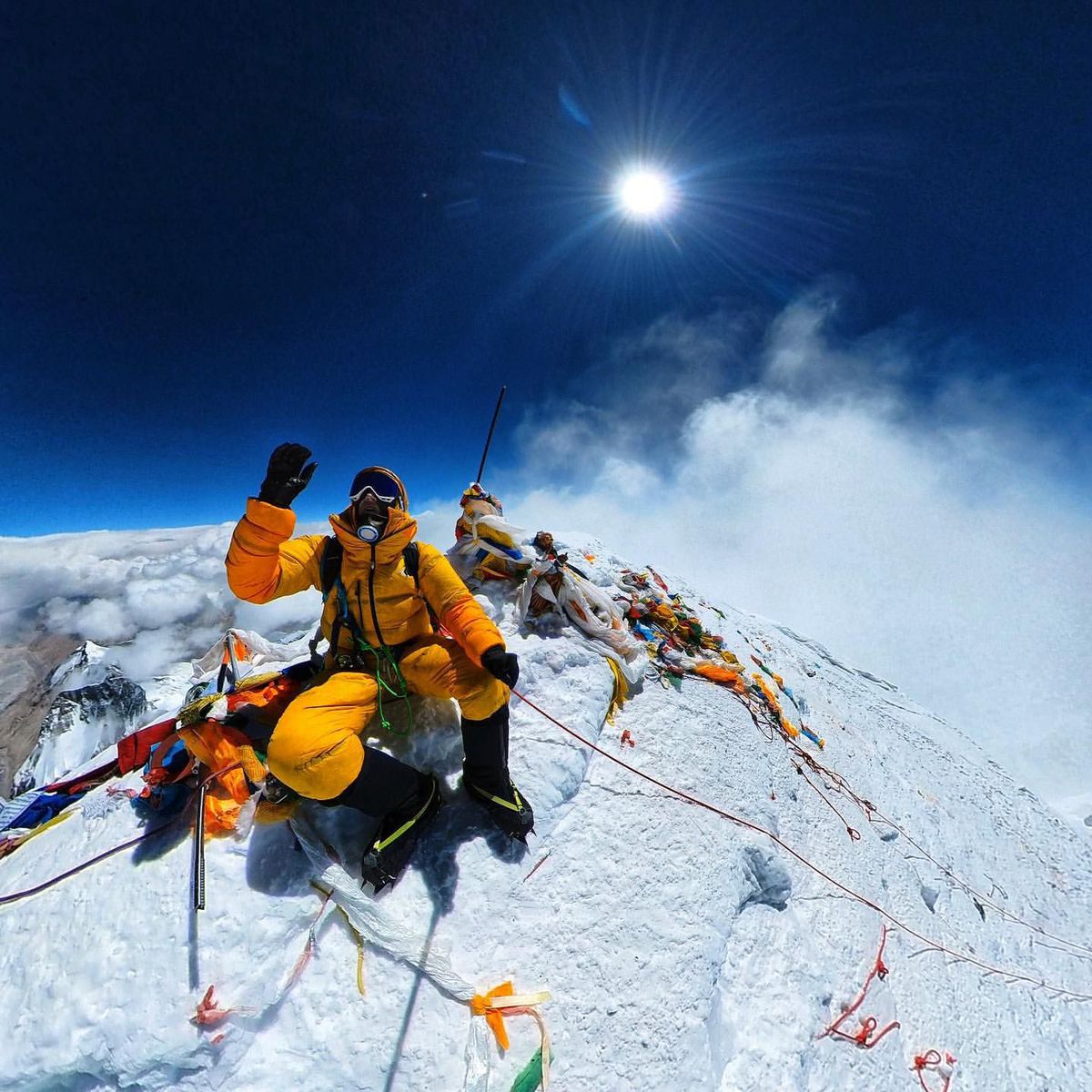 Long before dawn broke over the south col of Everest on September 25, 1992, Alberto and Félix Iñurrategi, two brothers from the province of Gipuzkoa (Spain), stepped out into the cold and set their sights of the summit. They were already at an altitude of 26,000 feet and had decided not to use oxygen tanks. “We were just kids and were a little scared when we set off for the summit. We weren’t afraid of the mountain, but of what the extreme altitude could do to our bodies,” said Alberto. When they reached 28,500 feet, they radioed down to base camp and announced that they would reach the summit in 30 minutes. It was so close, but the last 500 feet to the top took them three hours. “We summited at around 3pm–it was very hard for us.” Alberto was just 23 at the time. Before 1978, it was thought impossible for human beings to survive at the top of the world without supplemental oxygen, but then Reinhold Messner and Peter Habeler proved everyone wrong.

More than 300 people have died on Everest since 1953, when the first men reached the top. Almost a third died of exhaustion, altitude sickness, or disease. Anna Carceller, a doctor specializing in sports medicine and researcher at the University of Barcelona, says, “Exposure to [high] altitudes is enormously stressful on the human body. If someone hasn’t trained properly and is unable to keep moving, the body will suffer the accumulated effects of multiple stressors. Since unprepared climbers move at a slower pace, they have to spend more time in the hostile environment of Everest. This may mean more nights spent at higher altitudes.”

Carceller’s research focus is extreme physiology, and she recently published a study in Fissac that recommends using traditional Alpine climbing techniques at high altitudes as a highly efficient way of coping with hypoxia (a decrease in the oxygen available to the body’s cells). But commercial expeditions to the top of Everest accept climbers who very far from being able to ascend the mountain using only traditional Alpine techniques and equipment. They can’t cope without fixed rope courses, Sherpa guides and porters, well-stocked camps with high-tech equipment and food, and dozens of oxygen tanks. Traditional Alpine climbing only needs two things–lightness and speed. Anna Carceller notes that “using supplemental oxygen isn’t equivalent to exercising your body at sea level. That depends on the rate of oxygen flow set by the climbers. But the lowest altitude they will feel while using supplemental oxygen will be almost 20,000 feet above sea level. So, all the altitude-related constraints still apply, albeit to a lesser degree.” It is this inability to avoid the effects of high altitudes that kills many climbers. Their bodies simply shut down while their minds can only think of reaching the summit.

A brutal assault on the body

“The body is constantly working to maintain its equilibrium, even at sea level,” said Carceller. “The body regulates its temperature, nutrient availability, alertness…all the processes that keep us alive. It’s a continual juggling of external stress impacts and recovery processes. In extreme environments, this dynamic struggle to maintain equilibrium takes center stage. It consumes more energy and most of the body’s resources. When the external stress is greater than the body’s ability to maintain equilibrium, and the body is unable to recover during the unrelenting exposure to these stressors, then illness, failure to acclimatize, and even death can occur.”

Some people suspect that many of the deaths recorded on Everest were actually due to exhaustion, which can trigger multiple organ failure. The assault on the body is too much for some, and even the most experienced climbers can die. Anna Carceller says that the body loses equilibrium when there is an “exponential increase in energy expenditure because the body needs energy to compensate for environmental conditions, such as hypoxia and low temperatures. Many systems are involved–the cardiovascular, respiratory, endocrine, and other systems. The body detects a threat and triggers alarms for the body to fight back. This is the job of the sympathetic nervous system–to actively respond to aggression. Then, energy-consuming secondary processes are triggered: our hearts beat faster, our blood pressure rises, and we breathe more often.”

Climbers at high altitudes encounter a new set of problems, such as a decrease in energy intake because eating becomes more difficult. Staying hydrated also becomes harder because more water is lost at high altitudes through the skin and breathing. This is very serious,” said Carceller. Juan Vallejo, a climber who ascended Everest without oxygen, was only able to drink Coca-Cola at high altitudes.

More problems arise, such as the sheer exercise of climbing a mountain. “At low atmospheric pressures, it’s much more difficult for sufficient oxygen to reach our cells. These cells depend on oxygen to function. In fact, when we measure an athlete’s capacity to exercise, we measure maximal oxygen consumption (VO2 max). This is a person’s maximum capacity to take oxygen from the atmosphere and transform it into energy. At altitudes above 5,000 feet, VO2 max drops sharply. Even standing still at high altitudes consumes more energy. Any physical exercise requires much more effort than at sea level, and can easily exceed a person’s maximum capacity. In other words, everything causes more fatigue,” said Carceller.

“Therefore, at the top of Everest, where the atmospheric pressure is one-third the pressure at sea level, we are using all the available energy provided by our [low] levels of cellular oxygen. Most mortals would only be able to stand still and breathe, at best,” said Carceller.

Alberto Iñurrategi knew that the VO2 max of Messner and Habeler measured around 78 ml/min/kg. Forewarned, the two brothers from Gipuzkoa applied a scientific approach to their training for an ascent of Everest. Alberto attained a VO2 max of slightly above 80 ml/min/kg (Spanish athlete Kílian Jornet gets close to 90 ml/min/kg). “I think that many climbers of the Himalayas don’t realize that to tackle peaks over 26,000 feet, climbing skills are not as important as having a high aerobic capacity. They must train their bodies to be much more efficient,” said Iñurrategi.

If energy equals the sum of nutrients and oxygen, then human beings will always lose at high altitudes, even when using oxygen tanks.

But hypoxia-related pathology is often a difficult spectrum to analyze, said Anna Carceller. “Above a certain altitude, everyone suffers consequences to a greater or lesser extent. The brain is the organ most sensitive to a lack of oxygen and nutrients, and functional changes in the brain can include apathy and a desire to give up. Day after day, the deleterious effects of altitude take their toll on mountaineers, resulting in sleeplessness, malnutrition, dehydration, muscle atrophy, forgetfulness, and digestive problems. Moreover, the hypoxic environment clouds judgment and hinders motivation and decision-making. This is the inevitable degeneration that the body undergoes for being in a barely survivable environment.”

When all these attacks become too overwhelming, the body is left stranded in a terribly inhospitable environment. If you’re lucky and have a lot of money, a squad of Sherpas will be around to carry you down the mountain. Most just die right where the body drops.

Fatigue also manifests itself in the muscles because of changes in the distribution of blood to these tissues. “Because the respiratory muscles need so much energy to hyperventilate and because oxygen is scarce, it will become harder for muscles to function. The muscles are exercising with less oxygen, which leads more quickly to fatigue. This is called peripheral fatigue and it starts happening even at moderate altitudes,” said Carceller.

One of the nightmare scenarios for an aspiring Everest climber is to run out of supplemental oxygen tanks right off the bat. “Then, the body cannot defend itself because it has no reaction time and the attack is too intense,” said Carceller, who suggests a different strategy for climbing at high altitudes. “It’s interesting to observe the role played by the length of time and intensity of the stimulus. If you climb a mountain in stages, letting the body develop a rhythm and minimizing the stressors as much as possible, you have a much better chance of success than if you try to climb it all at once. This is especially true if you are so unprepared for the climb that the same level of activity would have defeated you at sea level. If stress increases, the body redistributes energy to the systems that are essential for survival. But this will have an intrinsic energy cost, which will cause the system to collapse if that cost is not covered.” And this is the cataclysmic physiological event responsible for a major portion of all the deaths on Mount Everest.