Croker, who was playing in his first game since round 22 last year, was taken from the field late after pulling up sore following a try-saving effort.

The Canberra veteran was making a defensive effort to clear the ball from the in-goal with Canterbury’s Matt Dufty threateing to score.

After the pair jostled and competed for the loose ball, Croker after the play was unable to get back up on his feet, appearing to hold either the shoulder or elbow on his right side.

“I hope this isn’t it for Jarrod Croker. It’s been such a tough fight to get back into this first-grade side.”

Late last year there were fears Croker would be forced into medical retirement after he underwent stem-cell surgery year on his knee. 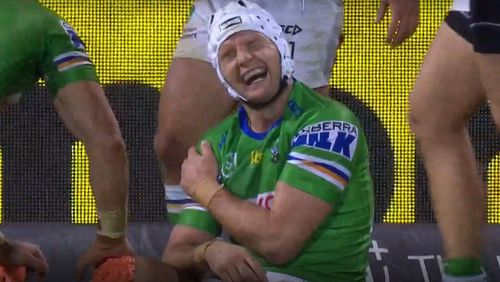