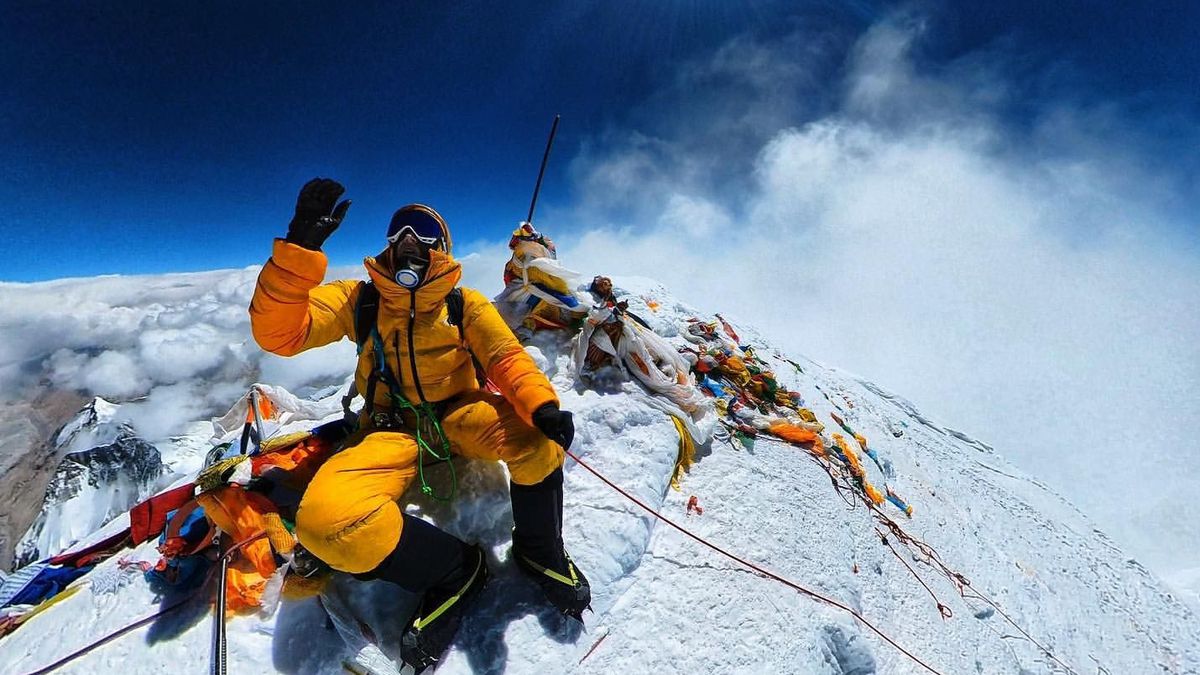 An icon of consumerism turned mountain, nowadays the Everest has lost its magical aura in order to embrace a tourism of selfies and social media ostentation. Even so, reaching the highest point of the planet by one of its two normal routes without the aid of artificial oxygen is still a very serious challenge, even for professional climbers, a first-rate physiological challenge. Doing it this way but via a different route – one that requires actual climbing – is almost inhumane. 10,700 climbers have reached the top since 1953, the year in which New Zealand beekeeper Edmund Hillary and Nepalese Sherpa Tenzing Norgay set foot on the coveted peak for the first time. Both carried on their backs cylinders connected to a mask that allowed them to breathe bottled oxygen to compensate for the drop in atmospheric pressure. Since then, only 220 of all the ascents have been completed without the use of bottled oxygen.

Scientific studies carried out in the 1960s determined that, on the roof of the planet, human beings could only survive in a resting position, without walking or doing anything other than breathing to stay alive; that is, if their brains did not suffer irreparable damage due to a lower supply of oxygen. In 1978, the South Tyrolean Reinhold Messner and the Austrian Peter Habeler went against all scientific predictions and sneaked to the top of the Everest without artificial oxygen. Habeler was so scared by the medical directives that he could not sleep in the high altitude camps, even after taking a fistful of sleeping pills. The physical effort necessary to reach their goal was so enormous that they literally crawled to the top. Messner is considered to be the best mountaineer in history and Habeler was an elite Himalayan climber, and their example, far from encouraging the climbing community to get rid of the artificial oxygen, discouraged the audience: if these two had suffered like dogs, the rest would agonize to death.

Last spring, German mountain guide and professional alpinist David Goettler climbed the Everest without bottled oxygen, using the original route from Nepal. He was using his fifth peak permit for three trips. In 2021, he tried with Kilian Jornet, but the heat thawed their plans on the appointed day. In 2019, the year of the viral lines and the people who died waiting for a place at the top, he decided to leave: there was just no way to break through the crowd. Goettler divides his time living in Cantabria and in Chamonix and, a few days after his return from Nepal, he still looks consumed by the effort. Laughing, he says that he lost about six kilos and couldn’t stop sleeping upon his return.

To face the Everest without oxygen, Goettler needed a day of high pressures and rather warm weather; he found low pressures and suffered temperatures of 30 degrees Celsius below zero. He needed weak winds, which he had. He needed as little traffic as possible, and when the waves of people subdued, he waited a while and then launched his attack: he was alone at the top, barely passing half a dozen climbers on the final leg of his journey. He needed to be in shape, and he has been for years, trained by one of the best specialists, running around 100 kilometers a week in the mountains, skiing, climbing. He needed to be light and, with his sponsors, he designed versatile garments and minimalist complements, aiming for absolute efficiency: nobody would help him take his equipment up and down, no Sherpa would set up his tent, melt the snow for him, or look after him. He was going to be alone, even if he had the misfortune of being there with 50 others on summit day. The one that moves without oxygen is a bird as rare as it is apparently weak, and in the event of a mishap, it is normal to die right there. He was going to need to be autonomous for all this – an attribute that almost nobody observes on Everest – and he was going to need his organism not to betray him.

Goettler recalls reaching Camp 4 in the afternoon and focusing on setting up the tent and recovering, hydrating as much as possible. At 9.00 pm, lacking a sleeping bag, he realized that he was wasting a lot of energy trying to keep warm, and he saw that the intensity of the wind had dropped a lot. So, at 9.30 am, he started walking. At this point, 950 meters of slope separated him from the top. Kilian Jornet possesses the best known time in a vertical kilometer of mountain: 28 minutes and 47 seconds for 977 positive meters in 1.77 kilometers. The distance between Camp 4 and the top of the Everest on its southern slope is, according to David Goettler’s GPS watch, 1.60 kilometers, although on the topographic map consulted by him, it appeared as 2 kilometers. Those figures are similar to those of Jornet’s vertical kilometer, achieved below the 1.800-meter mark.

It took Goettler 12 hours and 20 minutes to reach the roof of the planet. Then, six long hours to return to his tent in Camp 4. These are tremendous figures that speak of agony and distress. Shortly after reaching 8,500 meters, his performance began to plummet. That is when the suffering began. The intensity of the wind increased and the snow moved, partially covering his footprints. It was barely one or two centimeters, but it made him slip, so he had to increase his efforts. He took a step, breathed four times like a locomotive, took another step, breathed four times again. This went on for hours. On May 9, National Geographic installed a meteorological station at 8,810 meters, whose information is precious for expeditions and for the study of climate change; they had assured him that the peak was next to it. How long did it actually take him to reach there? He is not sure.

Hours passed as he tried to stay alert, marking the key parts of the ascent and trying not to lose sight of the point of no return. He was highly focused, mentally awake and attentive to any sign. Being alone, he talked to himself, going over his gestures, what lay ahead, keeping in mind that he still had to go back down. His arrival at the top was as lonely as it was funny. He wanted to record the precise moment, so he mustered all the strength he had left to take four unfortunate steps, to make it seem like he was walking normally. After that, he just fell on the ground, he recalls laughing.

Eighteen hours after leaving his tent he returned, sat down, and spent three hours completing a task that would have taken him 30 minutes at sea level: he kept repeating himself that had to melt some snow, drink, collect his things, put them in his backpack… then, ten minutes had passed and he hadn’t moved a finger. Everything happened in slow motion. Finally, he managed to descend to Camp 3 (7,300 meters) noticing how he improved the further he descended. The next day, he reached base camp. He knows that he will never leave that summit.