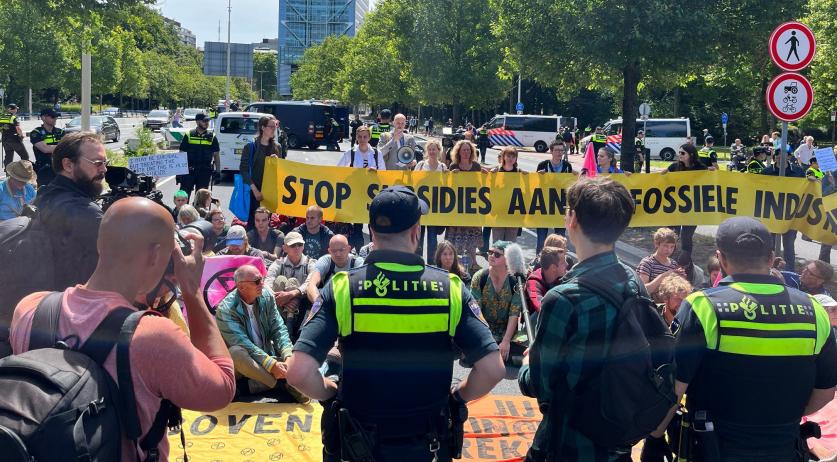 The group arrived at about noon to demonstrate against government fossil fuel subsidies. A vehicle was used to block access to the A12, after which two protesters chained themselves to the roof of the car. More demonstrators then planted themselves on the roadway.

It took police about 30 minutes before they began taking protesters into custody, including the two sitting atop the car. Authorities used an angle grinder to slice through the car’s roof and the chains. Police arrested dozens of people in total on the authority of Mayor Jan van Zanen, who had previously issued an emergency order after learning of the plan to block the highway. The road was reopened to vehicle traffic by 2:10 p.m.

“We are all for the right to demonstrate, which is a fundamental right. Civil disobedience is also a part of that. Even blocking a highway can be seen as a right to demonstrate, according to the European Court of Human Rights,” said Chris Julien, a spokesperson for Extinction Rebellion NL. “Violence is where we draw the line. When you are not violent, you are within your right to protest,” he told NL Times.

“Police have not allowed us that right. They have not facilitated that.” After the A12 protest was broken up, the remaining demonstrators planned to move their protest to the temporary home of the Tweede Kamer.

Prominent attorney Bénédicte Ficq said in an interview last week that a slower police response to farmer protests which use tractors to block access to roads and businesses made it seem like a double-standard was in place. Police tend to quickly put an end to peaceful climate activist demonstrations while allowing lengthy, extended protests organized by farmers, with the latter having an increased likelihood of aggression. “I understand that the police and the judiciary do not want to allow things to explode in the Netherlands,” Ficq said.

“It is a de-escalation policy. Major escalations are not expected among the climate activists, but [they are] among the farmers who use tractors. That is why the peaceful climate activists are handcuffed,” she continued. “Visits to government officials, intimidation and threats of violence. In my view, that is unacceptable. You are being held hostage by people who are prepared to use violence.”