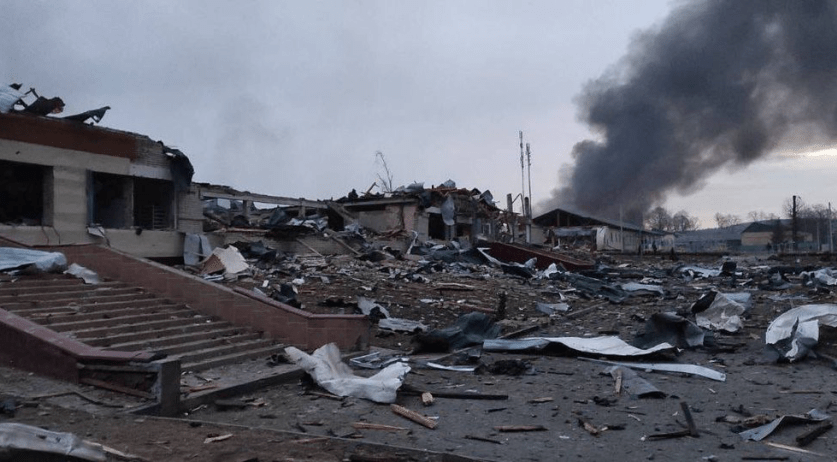 An unknown number of Dutch citizens were injured on Sunday after Russian forces attacked a military base in Yavoriv, Ukraine. About 30 missiles were fired at the training camp outside of Lviv killing at least 35 people and injuring many others, the BBC reported based on statements from the local governor. The camp is less than 25 kilometers from the border with Poland.

This is Starychi, Lviv region. Russians destroyed a peacekeeping center near the Polish border. The number of deaths is being clarified. pic.twitter.com/DG7qD9CkGg

Gert Snitselaar, who coordinates the Dutch members of the Foreign Legion, told the Telegraaf and AD that it was clear Dutch people were killed in the attack. He did not want to offer a specific number just yet for fear of a disinformation campaign. “I was in contact with a few this morning, but since then there has been no communication,” he told AD.

“This morning I had contact via WhatsApp with some volunteers on the base who reported to me that there are also injured among the Dutch,” he confirmed to Telegraaf. The governor of Lviv said that 134 people were hurt. Previous estimates suggested nine deaths and 57 wounded.

Snitselaar was desperately trying to confirm who among the Dutch were wounded, and was relying on information from the Ukrainian colonel at the base. Over seventy citizens of the Netherlands are fighting on behalf of Ukraine. At least 16 of them were known to be safe after the missile attack, as they were on their way to the frontlines in a group. Officially, the Netherlands does not forbid its citizens from fighting with a foreign military, unless that country is at war with the Netherlands.

Before reports of Dutch injuries surfaced, Prime Minister Mark Rutte on Sunday said that Russia’s attack on a military training center near the Polish border is extremely worrying. The prime minister was a guest on the television program WNL op Zondag, along with NATO Military Committee chairman Admiral Rob Bauer, who called the attack a “clear signal” to the West.

Both men, however, agreed that there are no signs that Russia intends to attack a NATO territory. Russia is not seeking to make NATO an opponent, Bauer said.

“They are really staying away from us at the moment,” Bauer said. “While they normally have a somewhat more aggressive attitude towards NATO.”

Rutte also repeated his earlier assertions that the Netherlands would not send troops to Ukraine or set up a no-fly zone. On March 12, Rutte said any military intervention could have “potential consequences that are incalculable.” Instead, the West will continue offering humanitarian aid and issuing sanctions against Russia.