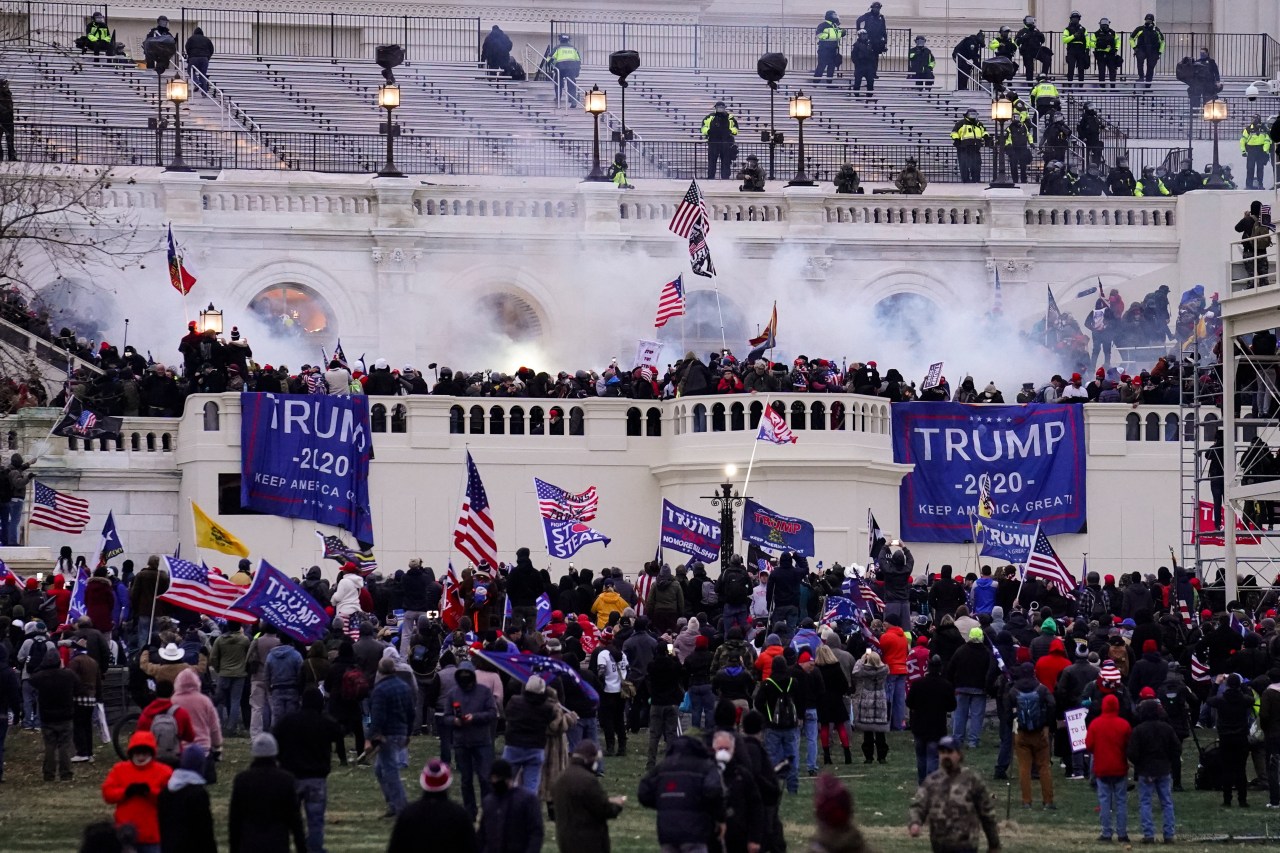 A former Virginia police officer pleaded guilty on Friday to storming the U.S. Capitol with another former officer who is scheduled to be tried next month on charges related to the riot.

Former Rocky Mount, Virginia, police officer Jacob Fracker, who was fired by the townafter his arrest, has agreed to cooperate with federal prosecutors, his attorney said. A date for his sentencing wasn’t immediately set.

Fracker pleaded guilty to conspiring to obstruct an official proceeding, the joint session of Congress that convened on Jan. 6, 2021, to certify President Joe Biden’s electoral victory. The felony charge is punishable by a maximum prison sentence of five years.

Fracker’s co-defendant, Thomas Robertson, has a trial scheduled to start on April 4. The town of Rocky Mount also fired Robertson after the Capitol siege.

Fracker and Robertson were off duty when they drove with a neighbor to Washington, D.C., on the morning of Jan. 6. Fracker’s indictment says Robertson brought three gas masks for them to use.

After listening to speeches near the Washington Monument, Fracker, Robertson and the neighbor identified only as “Person A” walked toward the Capitol, donned the gas masks and joined the growing mob, according to the indictment. Robertson was carrying a large wooden stick and used it to impede Metropolitan Police Department officers who arrived to help Capitol police officers hold off the mob, the indictment says.

Fracker and Robertson posed for a photograph inside the Capitol during the attack and later posted about the riot on social media. Robertson was photographed making an obscene gesture in front of a statute of John Stark in the Capitol’s crypt, prosecutors said.

Fracker and Robertson had sworn to uphold the law, even in “the face of volatile and challenging circumstances,” prosecutors wrote in a court filing.

“They broke this public trust when they participated in the riot at the U.S. Capitol,” they added.

Before the riot, Robertson posted on Facebook about his belief that the 2020 presidential election was illegitimate and referenced an “open armed rebellion” and “insurgency,” according to Fracker’s indictment.

“A legitimate republic stands on 4 boxes. The soapbox, the ballot box, the jury box, and then the cartridge box. We just moved to step 3. Step 4 will not be pretty,” he wrote on Nov. 7, 2021.

Robertson has been jailed since U.S. District Judge Christopher Cooperruled in July that he violated terms of his pretrial release by possessing firearms. The judge rejected Robertson’s suggestion that 34 guns he ordered before June 29, when FBI agents searched his home, are simply World War II collectables.

Meanwhile, a former West Virginia state lawmaker charged in the Capitol riot has a plea agreement hearing scheduled for Friday afternoon. Derrick Evans, who was a Republican member of West Virginia’s House of Delegates, resigned after his arrest in January 2021.

On Thursday, a Texas man who was “forgotten” by the court system after his arrest on riot-related charges pleaded guilty to assaulting a police officer with a pole.

Lucas Denney has been jailed since his initial court appearance in Texas a day after his Dec. 13 arrest. He was indicted on an assault charge on March 7. Denney’s lawyers accused the government of unlawfully detaining him for weeks without charging him, depriving him of his constitutional right to due process.

During a March 7 hearing, U.S. Magistrate Judge Zia Faruqui apologized to Denney and said he hopes “no one else has fallen through the cracks.”

“When I look at you, I see a presumed innocent person. And there is no circumstance under which an innocent person should be forgotten, and that is what happened here,” Faruqui told Denney, according to a transcript of the hearing.

Prosecutors conceded that they failed to comply with the Speedy Trial Act and should have presented an indictment to the grand jury or charged Denney before Jan. 22.

“But there is no evidence of bad faith, a pattern of neglect, or something more than an isolated incident that resulted from a number of unfortunate factors,” they wrote in a court filing.

Denney is scheduled to be sentenced on June 9.

More than 760 people have been charged with federal crimes related to the Capitol riot. Over 230 riot defendants have pleaded guilty, mostly to misdemeanors, and at least 127 of them have been sentenced. Approximately 100 others have trial dates.

During Denney’s March hearing, Faruqui questioned whether the Justice Department “has bitten off more than they can chew” with its Capitol riot prosecutions.

“The government here has chosen to charge the largest case ever. If they do not have the resources to manage doing something of that magnitude, they ought not do that, because you cannot charge cases if you can’t follow through with them,” he said.