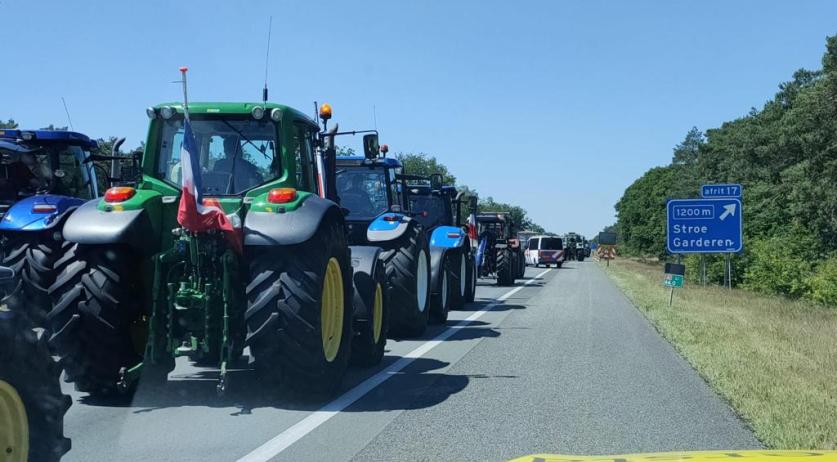 The farmers’ protest in Stroe started at around 1:15 p.m., more than an hour later than planned, because farmers were still stuck in a traffic jam on the way to the site. The police closed the A1 highway between Amersfoort and Apeldoorn in both directions in an attempt to solve the massive traffic jam on the highway. Emergency services are handing out water to people stuck in the mess, NOS reports.

The highway A1 highway closure will last into the evening, public works department Rijkswaterstaat said to ANP. The department and travelers’ association ANWB warned road users to prepare for a rough evening rush hour.

The municipality of Barneveld urged people to stop coming to the protest. “The traffic on all roads is at a complete standstill, and the parking lots are full. Massive jams are also expected on the way back,” the municipality said.

According to the organizers of the protest, some 40,000 farmers gathered to protest against the Cabinet’s nitrogen policy, which aims to cut nitrogen emissions by up to 70 percent in many places in the country. The measures will affect many farmers.

Bart van Kemp, chair of farmers’ action group Argactie said that the Dutch State is “at war with the farmers’ republic,” according to the broadcaster. “Martial law has been declared to take our land and property,” he said, calling on farmers to take action nationally and in their regions. He added that this fight must be fought “without weapons.”

Parliamentarians Tjeerd de Groot (D66) and Thom van Campen (VVD) planned to go to the protest to speak with the farmers, but the National Coordinator for Counterterrorism and Security (NCTV) warned them to stay away. According to the NCTV, their safety could not be guaranteed.

Minister Christianne van der Wal for Nature and Nitrogen was supposed to go to Floriade on a working visit today, but she decided to stay away over concerns that protesters may show up there and disrupt the world horticulture exhibition. “In consultation with the Almere police, we increased the security measures,” a spokesperson for Floriade said to NOS.