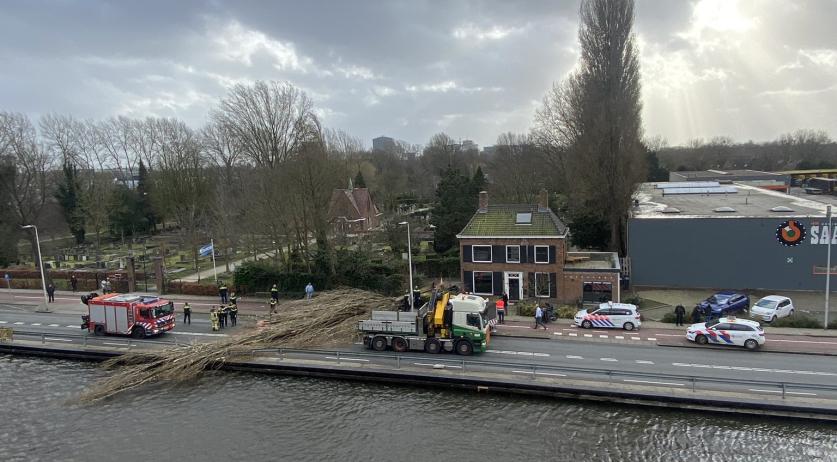 Authorities in the Netherlands confirmed the fourth fatality due to Storm Eunice on Friday night. At the same time, some warnings were reduced as the storm made its way further north. It will be some time before debris is removed from roads and trains, and there was a great deal of damage around the country.

A motorist crashed into a fallen tree near Adorp in Groningen. He became trapped and died from his injuries, the police there reported. The accident happened at around 7:30 p.m. on the N361 between Adorp and Sauwerd.

Earlier in the day, authorities confirmed two separate incidents in Amsterdam where people died when a tree fell on them. A third person was killed in Diemen when a tree came down on their car. An elderly woman in Boekel, Noord-Brabant, also suffered multiple fractures when she was struck by a falling tree.

Code Orange in three provinces scaled down to yellow

The storm had started to decrease in strength in the central and southern portions of the country on Friday evening, but the storm was still gaining strength in the north, reported Weeronline. The KNMI scaled down the Code Orange alert in Gelderland, Noord-Brabant, and Overijssel to Code Yellow, though wind gusts of 75-90 km/h remained possible there.

Persistent 100 km/h wind gusts remained in Noord-Holland and the Wadden Islands area, with the prospect of increasing up to 117 km/h at the Wadden Islands. The center of the storm was expected there later on Friday, but the wind could begin to reduce in the early morning hours on Saturday.

At 9 p.m., Code Orange remained in effect in Utrecht, Drenthe and Groningen. Wind gusts of 100-120 kilometers per hour can still occur there. On Friday afternoon, strong gusts of wind were measured in the south and center, which reached up to 145 kilometers per hour in Cabauw, near Lopik, Weeronline said.

Nuisance remains on the road until Saturday

People who head to the roadways must still take into account the inconvenience caused by Storm Eunice on Friday night and Saturday morning. Infrastructure agency Rijkswaterstaat said it was sticking to its advice that people stay off the roads until the storm passes.

Crews are expected to be busy clearing roads and salvaging stranded vehicles until Saturday, Rijkswaterstaat reported Friday evening. On many roads, there were many overturned trucks on Friday, and there were trees, branches or other objects on the road. Rijkswaterstaat predicted it will work on resolving the problems into the morning, because clean up work cannot get started until the storm has passed.

The situation on the roads became very chaotic at the end of the afternoon, due to the large number of overturned trucks

According to the ANWB, a chaotic situation had arisen on the Dutch roads at the end of the afternoon, mainly due to the large number of trucks that had overturned and roads that had to be closed as a result. This made it very difficult to plan out detours.

Damage and obstacles on the rails

Storm Eunice also caused major damage to the railroad on Friday. Trees fell down on the tracks on many routes. A spokesperson for ProRail said it was not known what the effect would be on train schedules on Saturday. She said on Friday evening that the organization has already started to check the track in areas where the winds started to die down a bit. “Actually, everywhere we go, there are trees on the tracks,” she said.

In Zeeland, a tree fell on the overhead wires between Vlissingen and Middelburg. The power supply was cut to a large area of the train service there, requiring repairs.

It was also clear that there were trees on the track in countless places, such as at Oudenbosch, Diemen, Den Dolder, Zutphen, Echten, Maarssen, Apeldoorn, Warmond, Ransdaal and Aadorp. Near Breda three trees blew onto the tracks. “At the Hoorn station, plating from a bicycle shed were blown onto the track and at Wadenoijen we found parts of the roof of a house,” ProRail wrote in a live blog.

Problems elsewhere in the Netherlands

Aside from damage to trees, facades blew off buildings and portions of rooftops were whisked away as a result of the storm. On the Maczekstraat in Dongen, Noord-Brabant, a roof blew off a row of houses.

Regional media reported that ten houses had to be evacuated as a result. The Midden en West Brabant Security Region announced that dozens of damage reports came in from the area.

The Utrecht Security Region reported that there were many felled trees and broken branches on the roads in that region. There were also several reports of solar panels blown loose from buildings.

In Voorhout, Zuid-Holland, part of the roof blew off of an apartment complex, according to Omroep West. A witness told the broadcaster that the solar panels blew off the roof and the bricks flew about. Nine houses on the Prinses Beatrixstraat in Moordrecht were also damaged by the storm. The Hollands Midden Security Region reports that the residents may have to be temporarily rellocated.

In Friesland, the fire brigade was dispatched to a Sneek apartment building where a side wall collapsed. Some of the homes on Hein Doekesstraat were evacuated.

The Zeeland fire brigade received about 380 reports of nuisance caused by the storm by about 8:30 p.m. These include blown-off roofs and fallen trees. “Fire trucks have sometimes driven from one incident to another,” according to the Zeeland Safety Region.