Legendary halfback Andrew Johns said he’d pick Latrell Mitchell for game two of the State of Origin series, even if he doesn’t suit up for the Rabbitohs beforehand.

Souths play today against the Titans in the opening kick-off of the Saturday triple header, but their star fullback caught COVID while in America getting treatment for a hamstring injury, and is now isolated from the team. 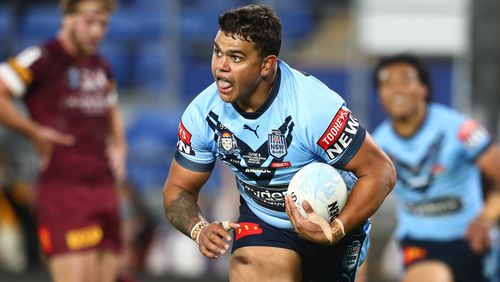 Souths play the Dragons next Thursday night, but that will be their last game before the Origin series moves to Perth on June 26.

Johns said that he personally would opt to bring Mitchell back in, even if he doesn’t play for Souths next week – but that he may have to play on the right-hand side due to the brilliant performance of Jack Wighton on Wednesday night.

“They’re both left-hand dominant players, they both run with the ball in the left hand.”

Wighton was probably New South Wales’ best player in a losing effort, and Johns said that Mitchell’s game-breaking ability can be unleashed anywhere on the field.

“You can play Latrell anywhere and he’ll make an impact,” he said.

“There’s big decisions to be made.”