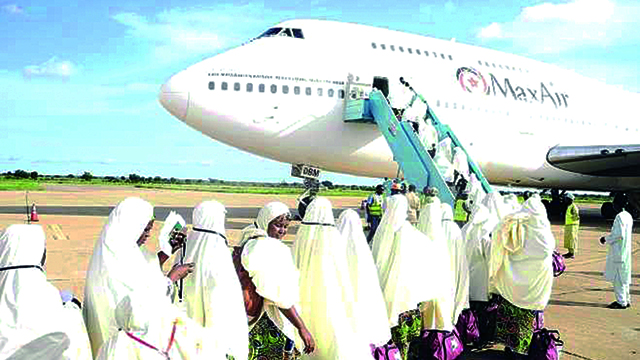 The airlift of the first batch of Nigerian pilgrims to the Kingdom of Saudi Arabia for the 2022 hajj will depart Maiduguri international airport on Thursday.

The National Hajj Commission of Nigeria (NAHCON) has approved three airlines include Max air, Azman air, and Flynas to convey 43,008 pilgrims allocated to the country to the holy land.

One of the local airlines, Max air, scheduled to airlift intending pilgrims for the inaugural flight, is set to deploy two Boeing 747-400 Aircraft for the operation.

A statement signed by Max air media consultant, Malam Ibrahim Dahiru, said preparation for smooth conduct of the 2022 hajj operations, has concluded. He said all technical, Carbine crew and ground staff have been mobilised for the inaugural flight.

Malam Ibrahim explained that Max air will position its aircraft in the early hours of Thursday, June 9 2022 in Maiduguri, Borno state for the airlift of the first batch of Nigerian pilgrims to the holy land.

“Since 2007 Max air has taken the lead in the Airlift of Nigeria pilgrims to Saudi Arabia. It is also involved the Airlift of pilgrims from African countries including charter and rescue operations in other parts of the world,” Ibrahim said.