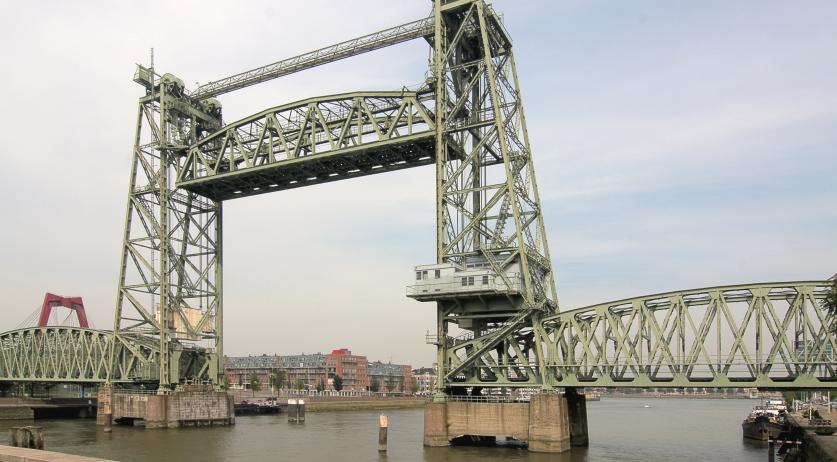 A bridge in Rotterdam that has monument status will not be dismantled so that a new superyacht belonging to Jeff Bezos can reach the sea. The 127-meter-long vessel will be the second-largest sailing yacht in the world. It is being produced by Oceanco in Alblasserdam for the Amazon founder, but the three-masted ship cannot fit under the Koningshaven Bridge, known locally as “De Hef.”

Oceanco informed the municipality that it is cancelling its current logistical plans to transport the 430 million euro yacht, at least for the time being, Trouw reported based on documents it obtained under a freedom of information request. The company said it was blindsided by the social unrest the plans caused, and shipyard workers felt threatened as a result.

Additionally, the Alblasserdam yacht builder said it feared the prospect of vandalism. Some Rotterdam residents are passionate about De Hef’s place in history. The retired railroad bridge was one of the first structures to be restored after the German’s destroyed much of the city center on 14 May 1940 during the Rotterdam Blitz.

Earlier this year, local resident Pablo Strörmann launched a Facebook event inviting people to throw eggs at the yacht once the shipyard launches it. He told NL Times, “It started more as a joke among friends after we heard the news about the possible dismantling of the bridge.” Thousands of people quickly expressed their interest in the event, which has since been taken offline. Strörmann acknowledged his satirical joke got “out of hand,” but he remained irritated that a bridge viewed fondly by some Rotterdammers might be damaged.

“Normally it’s the other way around: If your ship doesn’t fit under a bridge, you make it smaller. But when you happen to be the richest person on Earth you just ask a municipality to dismantle a monument. That’s ridiculous.”

Rotterdam project leader Marcel Walravens said in February that it was impractical to move the incomplete ship under the bridge and then finish it elsewhere, opting instead to remove the middle section of the bridge and then reassemble it. He also noted the importance the shipbuilding industry has to the area, with many people employed by the sector. “From an economic perspective and maintaining employment, the municipality considers this a very important project,” he said. “In addition, Rotterdam has also been declared the maritime capital of Europe. Shipbuilding and activity within that sector are therefore an important pillar of the municipality.”

The Mayor of Rotterdam, Ahmed Aboutaleb, also noted the number of highly-skilled jobs such projects provide for the region. He also said that the cost to take the bridge apart, and reassemble it, would be covered by Oceanco and its client. He also denied that any final decision had been made.

“I understand the industry is good for the local economy, but I don’t see this as a problem. Many superyachts were built, and will be built, that all fit under the bridge. It’s fine that there is also money to be made with the dismantling, but in my opinion it’s not only money that counts,” Strörmann said in response.

The plan to temporarily break down the 95-year-old bridge was initially reported by RTV Rijnmond. It then made headlines around the globe, with stories written by the New York Times, the Guardian, Le Parisien, and even the Washington Post, which Bezos owns. While the New York Times noted the protests that broke out thirty years ago when the municipality debated tearing down the bridge, the Washington Post noted its importance to the “industrial heritage” of Rotterdam. It also remarked on the city’s status as a European leader in shipbuilding.

It is not yet known how Oceanco will get the superyacht to sea. The company refused to comment to Trouw’s questions.