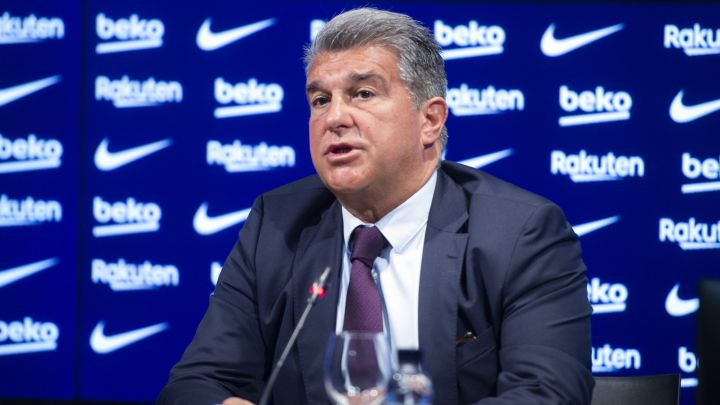 Joan Laporta appeared before the media on Tuesday.

The Barcelona president was speaking to analyse and explain the incident that occurred at Camp Nou the previous Thursday night.

Barcelona had been playing Eintracht Frankfurt in the quarter-final second leg of the Europa League and it was supposed to have been a home fixture.

But close to 30,000 Eintracht fans managed to secure tickets in the home end to make the tie almost a home fixture for them and Barcelona lost on the night and on aggregate.

Eintracht will face West Ham United in the semi-final.

“The club was not to blame but it was the most responsible,” Laporta said in comments carried by Mundo Deportivo.

“But I also must apologise to them because they were inconvenienced by the massive presence of German fans.

“The club didn’t sell tickets to the Germans aside from the 5,000 required by UEFA. More than 27,201 purchase requests were attempted from Germany and the system was overwhelmed.

“There was unofficial agents, organised groups and specialists in resale. The control mechanisms were overcome and inefficient.”

The mood around Barcelona has changed rapidly.

They were riding the crest of a wave up until last Thursday, convinced that they were destined for great things under Xavi Hernandez after back-to-back wins over Real Madrid and Sevilla.

But they followed their defeat to Eintracht up with another home loss against Cadiz on Sunday night and now face a battle on their hands to make it into the top four of La Liga.