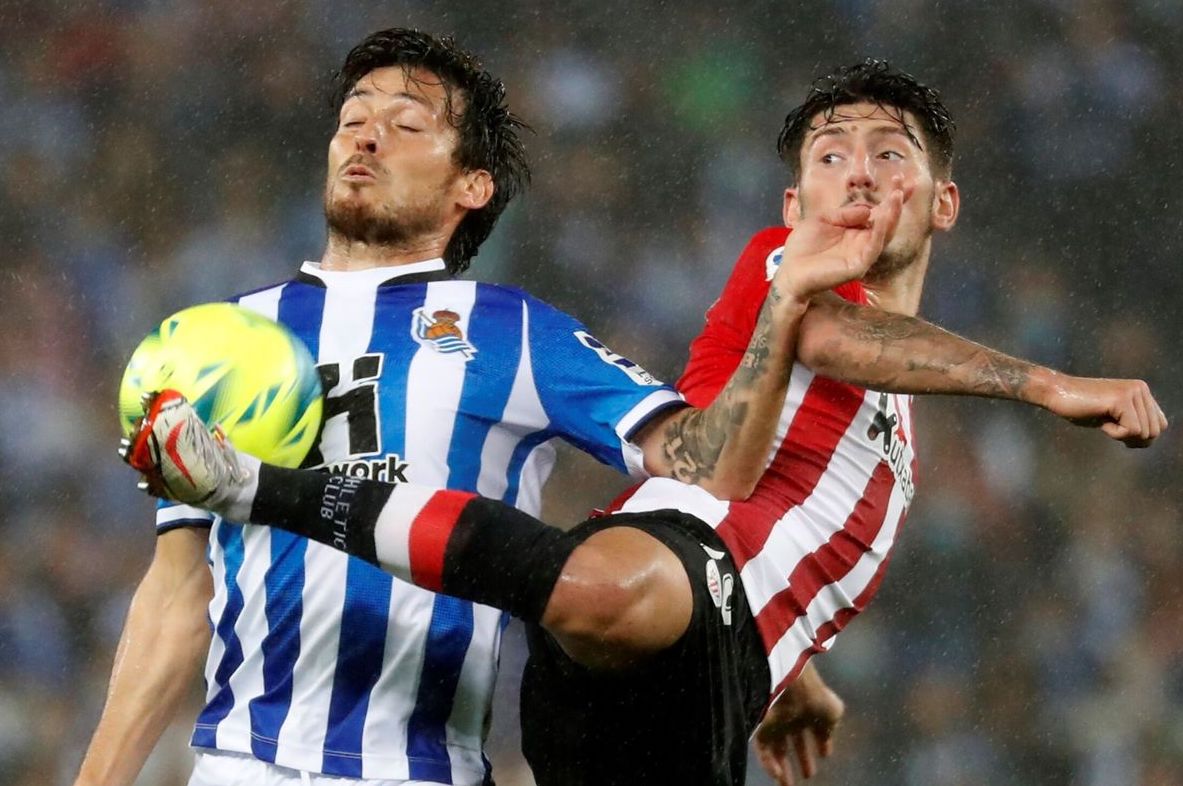 This article was produced in partnership with LigaFever.

Having watched the first batch of the knockout stages of European competitions one could feel pessimistic. Real Madrid played – and lost – like a relegation candidate in Paris, while Barcelona… well, Barcelona are playing in the Europa League. We did have some cheer coming from Sevilla, as Betis and Sevilla themselves did well in their Europa League matches. But the future is sombre. Atletico are in full self-combustion mode, so even if Real Madrid manage to lure Mbappe to the new Bernabeu to play in a team which needs a huge rebuilding scheme, it’s hard to see which Spanish team can realistically contend for Champions League glory in the next few years.

But yes, these clubs do know how to reinvent themselves. Let’s hope for the best and, in the meantime, prepare for an extremely interesting weekend in LaLiga, with plenty of high intensity matches.

Eduardo Alvarez: 1. Rayo’s slump in form is obvious. Four losses and one draw in their last five, and their offense is struggling so badly that they’ve only scored once in those 450 minutes. Striker Lucas Boyé won’t be able to play for Elche, but they have enough to get another three points they desperately need to stay up.

Phil Ball: X. Yes. We both said here that it was always going to happen to Rayo, because their home record hid their awful away form. Elche, however, are slightly difficult to read, and may indeed suffer without the excellent Boyé. They’ve won their last two home games (Villarreal and Alavés), but with Verdu and Palacios out too for Elche I reckon Iraola will go for a defensive set-up to re-stabilize the boat. Draw.

EA: X. Villarreal are in shape and they proved that against Real Madrid last weekend, adding keeper Rulli, never the most reliable chap, to the cause with a terrific display. That said – and knowing coach Unai Emery, they’ll probably rest a few players for their upcoming Champions League match against Juventus, so I’m going for an “X” against the hard-working, tough match-up Granada, who have lost their last four and need a few points to get out of the trouble zone.

PB: 1. I liked the Granada I saw recently against Real Sociedad. They had more strings to their bow than I’d thought. Maybe Roberto Moreno has more to offer than was thought. Machís is back for the hosts and Dani Raba, if he plays, will want to get one over his old club. I’ll go further than Eduardo. Home win.

EA: 1. Atleti’s crisis is a real one and it’s unclear how far it could go. From here I can’t see an end to it, as the players seem painfully uninterested, Simeone has lost control over the dressing-room and the relations between club management and the coach are at an all-time low. The midweek defeat against bottom of the table Levante was as bad as we’ve seen Atleti play since Cholo took over. Throw in Jorge Mendes trying to “help” – as in trying to sell Atleti a few more players and even a new coach – and this looks like the perfect storm. Indeed not the time to visit Osasuna, who’ve recovered the bite after an off month in January.

PB:  X. Tricky one to predict. Ed’s analysis is correct and this ain’t the trip you’d have wanted at this stage, particularly after the nadir of the Levante game.  But nadirs have a habit of setting up recoveries, and you’re also tempted to think that this may be make or break for Simeone – strange thought that sounds.  The problem is that they also have Man Utd next week to think about.  Nevertheless, I think they’ll grow in adversity. Scoring draw.

EA: 2. These two clubs changed coaches almost at the same time and while the hosts haven’t improved much, the visitors have made the most out of it. They look like a mid-table team now, which should be enough to win at the beautiful Cadiz.

PB: X. Well Cádiz are yet to win at home and Getafe haven’t won away. It’s a cute marriage of circumstance. What could decide which way it falls? The obvious result is a draw, which would suit Getafe, and I think that’s how they’ll set the game up.

EA: 1. After the miserable Champions League display in Paris, Real Madrid need to make a statement, even if it is against one of the weakest teams in La Liga. Ancelotti’s extremely conservative approach used the wrong players, and those who made the team performed appallingly for the full 90 minutes. If this match isn’t 3-0 at halftime, we’ll hear boos towards the bench and very likely directed towards the Palco Presidencial as well. Some other team could take advantage and upset the hosts in this troubled environment, but Alaves are painfully limited and also the worst travellers in LaLiga (five points in 12 matches).

PB: 1. I’m not going to enter into a debate about the PSG game, but I do think (implicit in Ed’s analysis) that PSG are not quite so good nor Madrid quite so bad as the versions we saw last week. I also agree that they’ll beat Alavés, since it has become almost an obligation after the Paris showing. Alavés are perking up a little bit after that win against Valencia and are relatively rested, but yeah – home win.

EA: 1. Liked how Espanyol played against Barcelona. When Darder and RdT connect, this is a very threatening team, although the coach’s tactics rarely favour that. But I do believe that they can take advantage of Sevilla’s hectic week – they made a serious effort in their 3-1 win vs Dinamo Zagreb) and win all three points on Saturday.

PB: 1. Hmmm…interesting one. I called the Espanyol result last week for precisely the reasons Ed puts forward, after I’d previously dismissed them as also-rans. And Sevilla won’t fancy it, as Ed says – or Lopetegui will put out a weakened side. Too many distractions for them, despite their decent win at home to Dinamo.  They’ll be tired, and they have travel next week.  So yes, home win.

EA: 1. Unimpressed by Barcelona’s last two draws (Espanyol and Napoli) even though at least in their Europa League match they created enough chances to win comfortably. For all their hired-hands up front, Barcelona’s main issues lie at the back and they can’t be fixed by formation changes. Indeed what they don’t need after the frustrating Thursday match is to have their knees kicked by Bordalas’ Valencia. This is a must watch, which might nevertheless get ugly. Guedes will appear on the score sheet.

PB:  X. Piqué will be out, and Araujo is doubtful, so the defence will be even worse than usual. But for all the talk about Bordalas and his magic defences, Valencia have conceded 38 goals this season, which isn’t so impressive. Barça will have to go on the offensive here. They’ll have no choice.  There’ll be goals, but I reckon it’ll end in a stalemate.

EA: 1. No team in Spain is in better shape than Betis, and they’re showing more depth than many of us expected in terms of formation alternatives and bench players. They won well against Zenit and may feel tired on Sunday, but they have enough talent to defeat Mallorca and keep dreaming of a Champions League finish this season.

PB: 1. Betis terrify me. Every week I think they might blow it, but they never do. Their attacking resources are scary, they play good stuff and their defence is mightily improved. Will the Europa League tiredness affect them?  Dunno, but although Mallorca are better than they look, I can’t see them surviving the pitiless storm of Betis’ offensive weather-front.

EA: 1. Even though last Monday Athletic Club missed a great opportunity to get closer to a top six finish, I still feel they look more energetic, more motivated and more intense than the visitors. And yes, a derby is a derby, but I’m sure they can defeat Real Sociedad at San Mamés. Marcelino still holds the edge over Imanol, and that makes a difference in these matches.

PB:  X. Oh God, please help me get through Sunday night. This is partly because the honest chap in me agrees with Ed, but the optimist cannot allow it. Athletic blew last Monday’s game because Iñigo Martinez was missing, basically. They’ve been steadily improving since Christmas, as though deliberately for this match. La Real were pretty solid on Thursday at Leipzig, and may choose to play this one on the counter too, but yes, they’ll tire in the second half and Athletic may swoop.  But….I’ll pray for a point.

EA: 1. On Wednesday, last place Levante made a miracle happen by not only defeating Atletico at the Wanda, but also dominating the match for most of the 90 minutes. But no, I don’t think they can repeat that against a rested Celta who are performing better and better.

PB: 1. Wednesday night was just weird, but maybe it was in the runes. However, despite the lift it will give to Levante, Celta have only lost once in the last 8 games. They looked a bit flat at Cádiz last week, but I have to go with Ed on this one. I don’t think Levante are about to stage a massive recovery, although they’ll probably throw caution to the wind up in Galicia.  I think they’ll worry Celta, but they won’t have enough to beat them.

Like Levante, I seem to be improving. Last week’s 6/10 has me breathing down Ed’s neck. He’s looking nervous…..