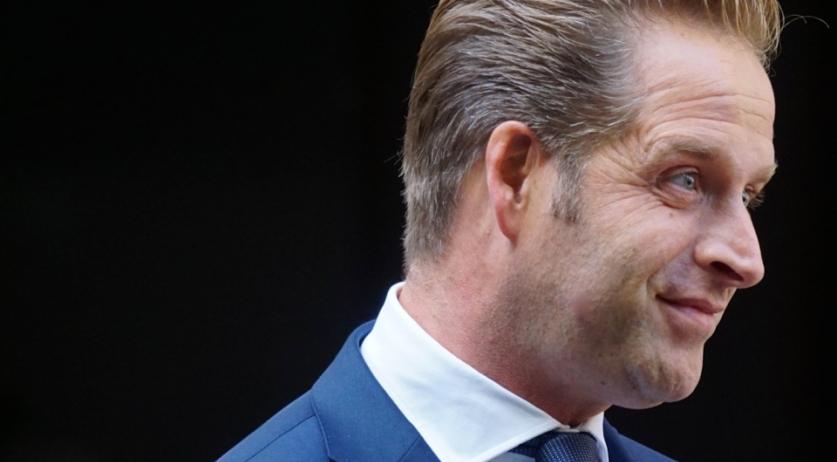 Opposition parties in parliament accused Hugo de Jonge of not being honest enough about his role in the infamous face masks deal with media personality Sywert van Lienden. The parties expect a good explanation from the then Minister of Health when he answers their questions later on Thursday.

De Jonge always denied involvement in the deal brokered by Van Lienden. But documents released at parliament’s insistence revealed that he had personal contact with Van Lienden about the deal.

De Jonge “was indeed aware of the deal,” said PvdA MP Attje Kuiken. She wonders why he never answered honestly when asked about it in the press. “Does he think it appropriate to have a semantic play of words about what involvement means?” asked the Social Democrat.

Maarten Hijink (SP) also thinks De Jonge should have said immediately that he knew about the deal and had been in contact with Van Lienden. And that while the picture emerges that the Ministry of Health had let itself be pressured by Van Lienden. “What good is a Minister who closes a deal because of imagery and then pulls his hands off it?” Hijink wonders. He also criticized De Jonge’s use of his private email and wondered whether, for example, the Dutch Safety Board has access to it.”

PVV parliamentarian Fleur Agema speaks of “nepotism” and stresses the involvement of CDA members – including Van Lienden and De Jonge – in the deal. She demands an apology and believes that parliament is entitled to one. “I haven’t seen one yet. But you know that apologies are not enough.” Wybren van Haga, chairman of his own split-off faction, believes De Jonge should step down. He already has a vote of no confidence in his pocket.

According to Volt leader Laurens Dassen, this is the latest in a “damaging pattern” that arouses suspicion and undermines trust. While it is logical that mistakes happen in a crisis, “you can be open, transparent, and honest in the retrospective,” Dassen said.

Many parties also stressed that it is terrible that parliament has to focus on this affair in a time of war and economic uncertainty for many Netherlands residents. But, say DENK and GroenLinks, among others, the issue revolves around a larger theme: the position of parliament and confidence in the government. According to GroenLinks leader Jesse Klaver, democracy is at stake. “It benefits from transparency. If that doesn’t happen, we have a big problem.” It is already leading to a “disturbed management culture,” said Klaver.

CDA parliamentarian Joba van Berg thinks that De Jonge’s integrity is “not up for discussion.” According to her, not only De Jonge but the entire government has been “taken for a ride” by Van Lienden and his business partners. Van den Berg believes that everyone in politics was “involved” in the deal in one way or another. “In the first months of the corona crisis, everyone called for face masks,” she said. And the offers the Ministry of Health received were always checked “under the responsibility of the Minister for Medical Care” – PvdA member Martin van Rijn at the time – “as it should be.”

The opposition parties severely denounced Van den Berg’s position. Agema (PVV) accused her of being “a CDA wheelbarrow.” “100 million euros in taxpayers’ money has been lost,” Agema said. “And if Mrs. Van den Berg thinks they can get away with this by saying that Van Lienden was the only villain: you are part of the problem of nepotism.”

Klaver is also struck by the fact that Van den Berg simply relies on De Jonge’s good intentions. “How do you know that?” he asked. He suggested Van den Berg should go sit in “section K,” the area where the members of the Cabinet sit during parliamentary debates. “You should be next to us, truth-finding.” Klaver called his CDA colleague’s attitude a “disgrace” for parliament. “Please sit down,” he said.

Hijink (SP) was also fierce in his criticism. “Officials said: they are a bunch of crooks, we don’t want to work with them. The Minister said: do it. De Jonge should not have covered up his involvement. The Minister’s intentions were dubious.”