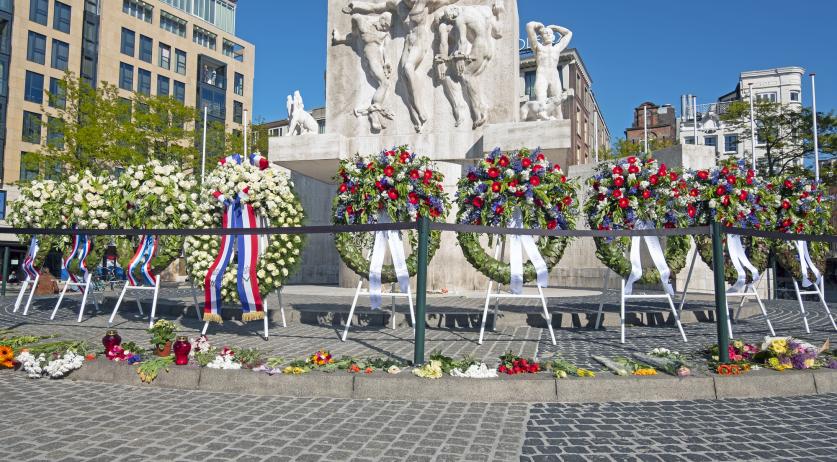 Like every year on May 5, the Netherlands will commemorate the civilians and soldiers killed or murdered since the outbreak of the Second World War, in war situations, and in peace operations. There are commemorations and ceremonies all over the country, with the public welcome again now that the coronavirus measures no longer apply.

At 11:00 a.m., Tweede Kamer president Vera Bergkamp will speak at the commemoration at the Honor Roll of the Fallen 1940-1945, after which wreaths will be laid. For the first time this year, this will happen in the temporary building housing the Tweede Kamer, the lower house of the Dutch parliament. The honor roll used to be on the Kamer building in the Binnenhof, which is now being renovated.

A military commemoration will be held at 1:30 p.m. on the National Field of Honor in Loenen. Minister Hanke Bruins Slot (Home Affairs) will speak, and a film will be shown about resistance fighter Anton de Kom, with a contribution from his granddaughter.

From 2:00 p.m., the 750 people who died or were executed in Camp Vught will be commemorated at the National Monument in the camp. A grandson and great-grandson of resistance fighter Anton de Kom will talk about their family history, and rapper Diggy Dex will provide the musical intermezzos.

In the former transit camp Westerbork in Drenthe, a commemoration starts at 7:00 p.m. with a silent march. Over 102,000 Jewish people were deported by train from Westerbork to concentration and extermination camps in Germany and other places.

Another commemoration will be held on the Military Field of Honor Grebbeberg in Rhenen, with bells ringing, a silent march, wreath-laying, and a parade past the graves. Over 850 fallen Dutch soldiers are buried on this Field of Honor.

The war in Ukraine will be highlighted in various ways this May 4, including at the National Children’s Remembrance Day in Madurodam. During this commemoration, which starts at 7:15 p.m., 12-year-old Markiian from Kyiv will talk about his flight from the war in Ukraine.

The Remembrance Day commemoration on Dam Square in Amsterdam is considered the national memorial. In the Nieuwe Kerk, historian and presenter Hans Goedkoop will deliver the May 4 lecture entitled Wat niet mag, or What is not allowed, in English. The ceremony outside on Dam Square will start around 7:50 p.m. King Willem-Alexander and Queen Maxima will lay a wreath at the National Monument on behalf of the Dutch population. A military trumpeter will play the Tattoo, followed by two minutes of silence at 8:00 p.m. Mayor Femke Halsema will then give a speech. The mayor of Amsterdam does this every three years, with other speakers invited in the intervening years. Last year, that honor went to Andre van Duin. This commemoration will be broadcast live on NOS.

As per tradition, RTL4 will report around the two minutes of silence on the commemoration at the former execution site Waalsdorpervlakte in the dunes of Wassenaar. While the Bourdon bell rings, people walk in a procession past the monument. The clock will go silent at 8:00 p.m.

As always, this May 4 will end just before midnight with the ignition of the Liberation Fire in Wageningen, where the capitulation was negotiated in 1945 in hotel De Wereld. Liberation Day, May 5, is ushered in with the fire ceremony. The fire is then spread through the Netherlands by 1,500 runners.