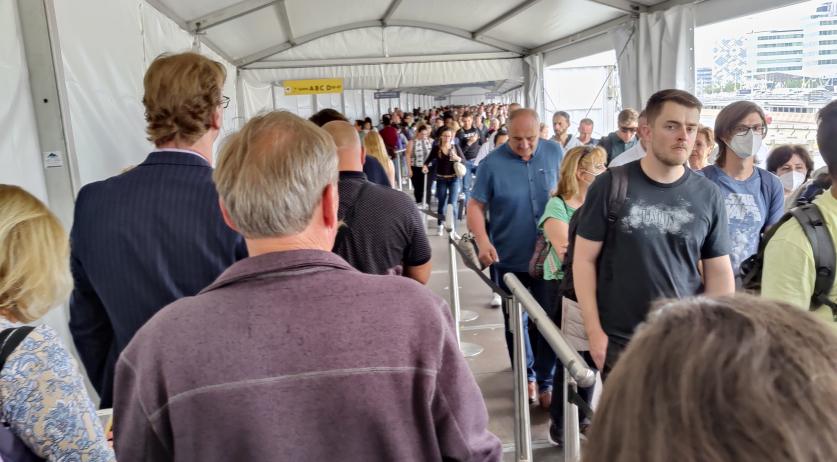 Strikes which were likely to take place this week at Schiphol Airport were cancelled on Tuesday after the airport and the FNV labor union reached an agreement on several issues, the airport and union told Dutch media outlets. The two sides spent days at the bargaining table to discuss understaffing, workplace conditions, and the amount of pressure workers face on the job. The negotiations took place in the wake of weeks of crowding issues at the airport, in which passengers were often forced to stand in line for hours to drop off a bag or clear security.

The agreement covers a wide range of issues, and details will be published on Wednesday. The union had warned the airport earlier in May that strikes could start as soon as June 1 if a deal was not reached.

FNV said that it wanted the airport to begin recruiting badly-needed staff, something which airport CEO Dick Benschop committed to doing earlier this week. Benschop released a plan meant to address the airport crowds that included recruitment of security staff and baggage handlers, but also better communication with the airlines about the number of passengers that can be easily accommodated. This could also lead to fewer flights at Schiphol, with some flights possibly moved from the second busiest airport in the European Union to regional airports in the Netherlands..

The two sides also reached a deal on a bonus for people working over the summer, which is expected to be particularly busy as air travel resumes in full for the first time since the start of the coronavirus pandemic. The sides agreed to terms of the bonus already on Sunday.

The period of heavy crowds and long lines at Schiphol started with a wildcat strike called by KLM ground crews on April 23. Their demands for firmer contracts with scheduling commitments and more staff recruited for assistance were initially met with the airline’s plan to plug the gaps with temporary workers. This prompted the crews to walk off the job the day the May vacation period began.

Since then, long queues stretching out the airport and down the road were regularly seen at Schiphol, including during the Ascension Day holiday last week.