The NRL season is only 10 rounds old and already it looks like Canterbury coach Trent Barrett is fighting for his future.

A 16-6 loss to Newcastle on Friday night has the Bulldogs on the bottom of the ladder with two wins to their name.

Barrett now has five wins in 34 games since taking the reins last year.

Nine’s Danny Weidler reports the Canterbury board is starting to grow impatient, and members are less than impressed with the results on the field.

Weidler wrote for the Sydney Morning Herald that Bulldogs football chief Phil Gould will support Barrett and won’t sack the coach, but pressure could come from above to make a move if things don’t improve.

“What’s worse for the coach is that he has overseen the majority of the recruits who are at the club,” Weidler wrote.

“I’ve asked Gould on numerous occasions about the Barrett strategy and he has backed him strongly.”

News Corp journalist Brent Read pointed out the board members must answer to the fans and members.

“If they don’t do what those members say, they get voted out,” Read told Nine’s Sunday Footy Show. 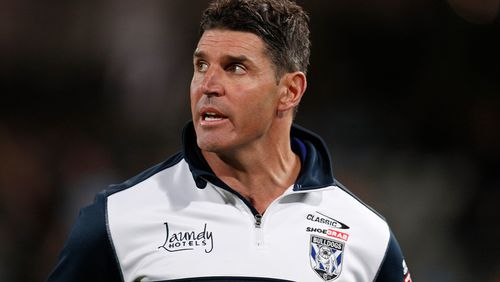