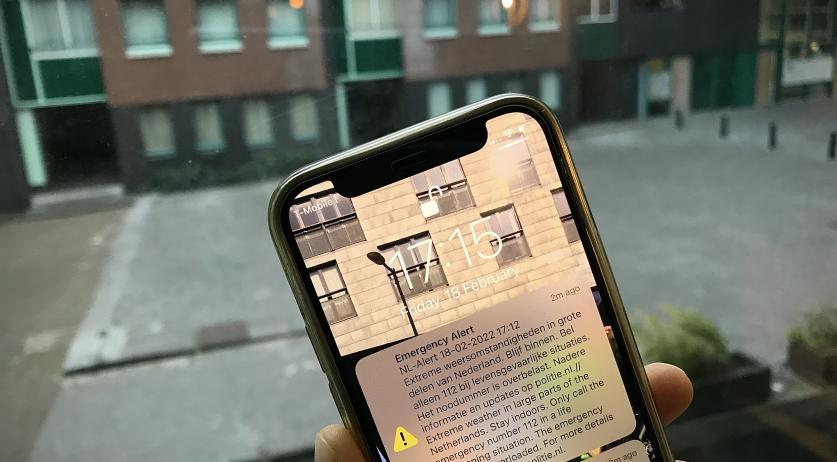 A third person was killed in the Amsterdam region on Friday afternoon due to Storm Eunice. The Amsterdam-Amstelland fire brigade reported that a cyclist died when a tree fell on Vrijheidslaan. It is the third known fatality in the Netherlands which was caused by the storm.

Authorities in the Netherlands used the national warning system, NL-Alert, asking them to remain inside, and warning them that emergency phone lines were overloaded. The message was sent out directly to mobile phones just before 5:15 p.m. on Friday, well after Storm Eunice made landfall. In the hour leading up to the message, two other people were killed due to falling trees, and another person was injured.

“Extreme weather in large parts of the Netherlands. Stay indoors. Only call the emergency number 112 in a life threatening situation. The emergency number is overloaded,” authorities said in the message. Police said separately that authorities received “hundreds of phone calls” from people who are experiencing nuisance or damage. “If people are in danger because of the severe weather, their reports will take precedence over other requests for help.”

An elderly woman was seriously injured on Friday afternoon in Boekel when a falling tree landed on her. She suffered injuries to her arms and legs, and was taken to the hospital with multiple fractures, a police spokesperson said. The accident happened at around 4 p.m. on the Bezuidenhout in the Noord-Brabant village, when the woman walked past as the tree toppled over.

One person was killed in similar fashion on Aalsmeerweg in Amsterdam-Zuid, where wind gusts reached 126 km/h. Another person died on Weesperstraat in the neighboring municipality of Diemen after a tree fell on their car while they were inside the vehicle. Shortly after the second death was confirmed, the Amsterdam-Amstelland police asked people to remain inside.

The Amsterdam-Amstelland fire brigade also said that the number of emergency reports increased dramatically on Friday afternoon. “It’s very busy. There are all kinds of things flying by, fallen trees and other types of storm damage.” Dozens of trees have also been blown down in other streets and on canals. Parts of the noise barrier on the A10 in Amsterdam-Noord have come loose, roadside assistance services reported on Twitter.

Many safety regions in the provinces where the Code Red or Orange weather warnings were issued due to strong winds have been busy with reports of storm damage. A plethora of reports were filed in various regions, ranging from fallen trees to loose roof tiles and roofing material.

The Haaglanden security region received dozens of reports per hour since the storm hit Friday afternoon. This mainly concerns blown down trees and blown over building facades, billboards and traffic lights that have come loose. Part of the roof of the stadium of ADO Den Haag also came loose, and the storm has destroyed a sports hall in Delft.

In Flevoland, about thirty reports were received by the control room since 3 p.m. “We are quite busy,” a spokesperson explained. These calls for help include reports of detached solar panels and roof ledges. Loose facade panels in Almere also created a dangerous situation on the Olivier van Noortstraat.

The Zaanstreek-Waterland security region already received about 150 reports by about 5 p.m. There is a lot of material damage, especially to buildings, said a spokesperson. “We are going to distribute a message with the call to stay at home. In some places it is dangerous on the road.”

The security region in and around Rotterdam also received dozens of reports of damage. There were several reports of fallen trees hindering traffic. A driver of a truck which overturned on the A4 motorway suffered minor injuries. A dangerous situation arose at the Oranjekerk on Rozenlaan in Rotterdam because parts of the roofing blew off the church tower.

In Zeeland there has been a “series of accidents” on main roads and highways, especially on the A58 near Reimerswaal and the Philipsdam. Thirty reports were received in Midden- en West-Brabant between 2 p.m. and 4 p.m. for which the fire brigade was needed. In just two hours, the number of calls was equal to the entirety of Storm Dudley earlier this week. In the southeast of the Noord-Province, there were still relatively few reports of storm damage.

NL-Alerts for national emergencies are rare, but not totally unique

The National Unit of the police department said 112 should be called only when people or animals are in life threatening danger, or if a tree could fall on a public road, or if their is a danger of building collapse. The relevant municipality can be called when there is no immediate danger, or if damage is contained outdoors, such as a tree which fell over on the ground, but poses no threat.

Because a large number of regional control centers are overloaded, the police have asked for an NL-Alert to be broadcast nationally. This can only be done by the National Coordinator for Security and Counterterrorism (NCTV). This has happened twice before. The first time was during a nationwide 112 outage in the summer of 2019 and the second at the start of the coronavirus crisis in March 2020.