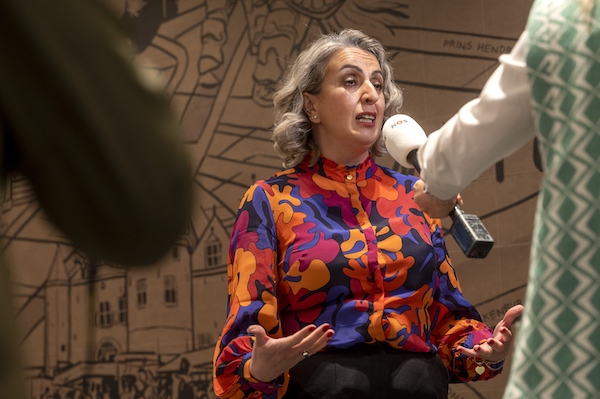 The controversy surrounding an MP for pan-European party Volt, who has been accused of threatening staff and sexual harassment, took a new twist on Monday, with the NRC publishing interviews with five of her 13 accusers.

MP Nilüfer Gündogan was suspended as an MP last month,  after the allegations were made, but last week the party was ordered to reinstate her following a court ruling. The court said the party had shown insufficient legal and substantive grounds to suspend the MP and criticised the secrecy surrounding the claims.

The NRC has now published more details about the accusations, which until now have remained unclear.

One man said Gündogan, who according to witness accounts was drunk, had embraced a man and kissed his neck. Another said he had had a late night phone call from the MP asking for sex. Both men said ‘they laughed it off initially’ but later thought the behaviour was unacceptable.

A 17-year-old party worker said Gündogan had slapped her on the behind ‘almost certainly with a sexual intention’.  She was told by then party chairman Laurens Dassen to speak to Gündogan about the matter. Dassen has since said the responsibility to discuss this should not have been given to a minor.

The MP was also accused of highhandedness towards the girl, who said at a group meeting during a team building weekend that she ‘did not feel respected’ by Gündogan.

‘She became incensed and called me names. She told me I was a just a snotty nosed kid, that I was a danger to the party and that I should listen to her.’ When she burst into tears, no one intervened, the teenager told the NRC.

Other party workers said a previously friendly relationship with a gay colleague quickly turned into a power struggle, with Gündogan making remarks about his sexual orientation and trying to convince Dassen not to extend his contract. The man still works for Volt.

The party workers said Dassen acted as ‘a peace keeper’ and that the party board was too lenient, for instance about Gündogan’s shouting, including at Dassen himself.

In a reaction, Dassen and the board admitted that they ‘underestimated the risks connected with the Nilüfer’s behaviour’.

Gündogan herself told the paper that the party workers are conducting a ‘witch hunt’ against her and that ‘people want me to stop being an MP’.

She admitted patting the gay party worker on the bottom in parliament but said it ‘was meant in a friendly way, we were still friends then’. Asked about other complaints about touching people, she said it was down to her ‘ touchy feely-ness, her Turkish passion’.

Asked about her alleged intimidating behaviour Gündogan said she had ‘a short fuse’ and that ‘since the death of her husband she had become irritated and agitated’, and that she had sought therapy.  About her drunken behaviour, she said she sometimes drinks to much at parties, ‘so shoot me’.

‘The judge’s verdict wiped the floor with the investigation. The level of the accusations is lamentable,’ Gündogan told the paper. ‘They were at the level of “what an awkward pain of a woman she is”, just to make me ashamed of doing my job as an MP.’

The possible return of the MP to the parliamentary party, as ordered by the court, would prompt their resignation, the five complainants told the paper.