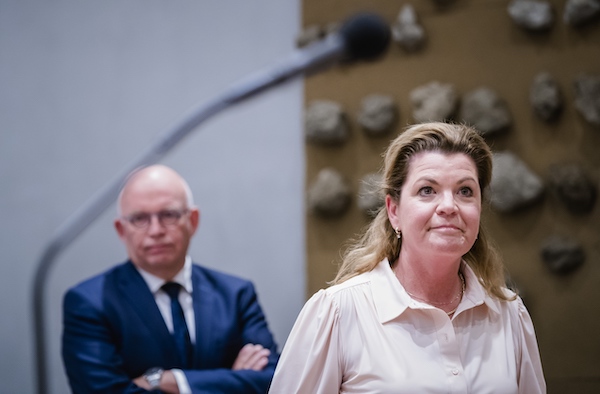 Nature and nitrogen minister Christianne van der Wal has told MPs she has no option but to take action to reduce nitrogen compound pollution because of its impact on vulnerable habitats.

Van der Wal outlined her plans two weeks ago, which ‘unavoidably’ include the compulsory closure of some farms near reserves, prompting a mass protest by farmers earlier this week.

Speaking during a heated debate on the government’s strategy, Van der Wal said that more would become clear about the plans in the coming year. ‘Unfortunately, there is no clarity for the farmers at the moment,’ she said.

The minister also said that a map showing where action needed to be taken was to give an idea of where changes needed to be made. It is up to farmers and the provincial authorities in the coming year to decide how the targets can be met, she said.

Nationwide, the amount of nitrogen emissions must be cut by 50% by 2030.

‘We are bottom of the class in Europe when it comes to protecting our habitats,’ she said. ‘I have been told to do our homework. Europe is not willing [to be flexible] because we have not stuck to the agreements.’

Farm minister Henk Staghouwer also faced criticism from MPs from across the political spectrum, particularly for his failure to develop a plan which will help farmers financially.

A majority, including those from his own party ChristenUnie, called on the minister to draw up a more coherent plan by the budget in September.

Meanwhile, infrastructure minister Mark Harbers has confirmed that 14 major road and waterway projects have been delayed by years, partly because of the shortage of experts in dealing with nitrogen-based pollution.

The construction of roads and waterways requires an assessment of the likely impact of nitrogren pollution generated by the work, but the lack of expertise in this field has led ‘difficult choices’ about what projects should be given priority.

Plans to expand a number of motorways, such as the A58 between Eindhoven and Tilburg and the A7 and A8 between Amsterdam and Hoorn are among those which have been put on ice. But improvements to the A4 around The Hague will go ahead, Harbers said.