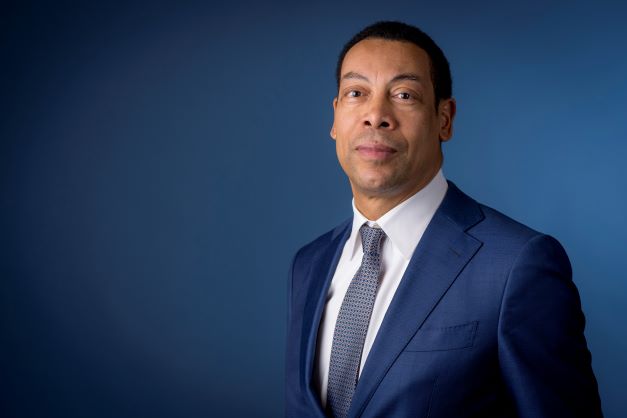 ‘Less than 2% of top positions in companies are held by people with a non-Dutch ethnic background,’ he told the annual meeting of the Inclusion Leaders Network. ‘Within the government, that figure is 1.7%. I know, I broke through that ceiling…by never turning away from people but always trying to connect.’

Weerwind, a Dutchman of Surinamese descent, joined the government for D66 after serving as mayor of Almere, Velsen and Niedorp and said he was the Netherland’s second black minister – more than a century after the first.

‘Velsen was a personal milestone for me, as it was the first city where my father first had food in a Dutch home,’ he said. ‘Fifty years later, in that same city of Velsen in IJmuiden, he was there when his youngest son became the mayor.

‘Imagine, in this place, from where when land was still sea, the ships of the Dutch East India Company and Dutch West India Company departed on their business, colonial trade, the very trade that brought my ancestors to Suriname in chains. We have come a long way since then. Their direct descendant is now the minister for legal protection, but that does not mean the glass ceiling is no longer there.’

He said that while he did not think quotas were necessary, perseverance, advice networks and role models were vital.

Many people who now consider themselves ‘ethnic’ Dutch, have other roots, he added: ‘If you look at the history of Amsterdam, or Schiedam or Dordrecht, immigration is a part of the Netherlands. You can’t say there’s a Dutchman or Dutchwoman. All people are looking for good health, prosperity, not just for themselves but for the next generation.’

He said that he took on the government post in a political climate of more conservatism and right-wing thinking, to ‘make that change in reality.’ Key, he said, is openness in dealing with issues such as institutional racism in the Dutch tax office’s approach to investigating fraud.

‘We discussed it in cabinet, and I am so happy we told it to the people of the Netherlands,’ he said. ‘I don’t believe that that it only happens in the Netherlands. I’m sorry – we have insulted people, a lot of people, but if we open the discussion, I believe we can change and learn from it.’

The event was co-organised by former Eindhoven councillor Mpanzu Bamenga who unsuccessfully took Dutch border police to court for ethnic profiling after he was pulled aside for resembling a ‘Nigerian money smuggler’ by being black, wearing a suit and walking fast. After international criticism of the local court verdict, the Dutch border police announced last year it would stop ethnic profiling.